“… Based on unconventional thinking and the unlimited power of teamwork, our approach transcends the barriers of distance, organization and common practice.”
— from the Mission of EcoNetworks

Around the world, there are entrepreneurs who have already been transcending barriers of distance. To learn and integrate their experiences, Tomoko Ota, operation partner in Spain, shares conversation with such entrepreneurs and key learning. 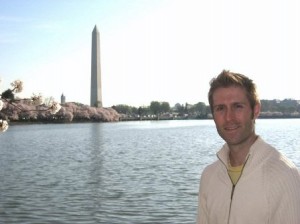 Founder and CEO of EasyBroker, CRM and marketing tool for the real estate industry.
http://www.easybroker.com/

Eric Northam set up his business in Buenos Aires, Argentina in 2007, after traveling around 26 countries in Eastern Europe, Southeast Asia and Latin America. Eric spent one year studying in Japan when he was at university.

After successfully running his business for five years in Argentina, he made a decision to move his operation to Mexico where he saw the real future potential and the strong economic growth, while in contrast the political situation and economic environment was getting increasingly worse in Argentina.

Eric and his team have just launched a brand new website for finding real estate in Mexico, EasyAviso (http://easyaviso.com/) — a complementary site to EasyBroker.

1） What does your business EasyBroker do?

We help real estate agents market their properties online and improve their customer service. Imagine trying to keep track of hundreds of clients and what types of properties they are looking to rent or buy. Or, as a manager, how do you determine that your agents are following up with each client? We provide software in the cloud to help solve these sorts of problems.

2） Why did you start this business and choose Argentina as your launching place?

In 2005 I travelled the world for over two years while working remotely. During that time I rented countless apartments and almost every real estate agency I worked with was still using pencil and paper. I wasted so much time and had many bad experiences so I decided to try to solve the problem.

I chose Argentina because I had a great time there on previous visits and I thought it would be a great place to live, where things weren’t too expensive and there are lots of tech talents.

3） How was your experience as an entrepreneur in Buenos Aires? Good and bad things. What were the hardest points to do the business in Argentina?

I learned a lot in the six years that I was there. Coming from the United States I started out trying to do everything by the book but quickly realized that Argentina doesn’t work that way. If you tried to do everything 100% by the book you won’t ever get anything done. You need to move forward and then later ask for forgiveness if you do something wrong. It’s a very forgiving country compared to the United States.

Argentina has wonderful talents who are culturally not so different from Americans. Surely there are differences but they are minor compared to the cultural differences in Asia or Eastern Europe which were two other areas of the world I was considering to start my business.

The government is the biggest challenge. There is rampant inflation. Laws change on a regular basis. It’s difficult to get money legally into or out of the country. Hiring and firing is difficult. There are new official holidays every year and you can feel that the economy as a whole is getting worse. Imported goods are also very expensive and in many cases you can’t find them anymore.

4） How was the transition from Argentina to Mexico? Why did you make that decision?

I decided to move to Mexico because our client base there was growing much faster than in other countries and I wanted to focus on building the business in one country rather than trying to sell all over Latin America. Also on my first visit here it was clear that the economy was growing and had a lot more potential than in Argentina.

5） How was the experience to move your business to Mexico?

It was fairly easy to get started although it’s still a pain to incorporate compared to the United States. Whereas in the United States, you can probably incorporate a business in a few hours, for a few hundred dollars without help of a lawyer. It takes a month here and about $1,200 USD.

Other than that, the move was fairly easy. The most important step is to network and meet other entrepreneurs so that you don’t make the same mistakes that others have made and connections are very important here.

6） Please also share with us about your workstyle. What is your daily habits to keep yourself up?

Since moving here, I’ve been attending a lot of events; most dedicated to entrepreneurs. I’ve been presenting and volunteering time to help out other entrepreneurs, which has been rewarding and helping me make some great contacts.

Outside of work, I go to gym, play tennis and love trying new food. On the weekends there are a lot of things to see in the city and you can easily escape to the mountains for hiking and to get a break from the city. Also, food is great here — almost as good as in Japan, I think. I also have a ton of places that I want to travel to in Mexico.

7） To get useful information, which media (news site, social media, mail list, etc.) do you use?

I like to read a lot but I tend to stick to books or articles recommended by friends. I personally find it generally a waste of time to read newspapers and try to follow current affairs. There just isn’t enough time to absorb all the information and I’m sure I’ll hear about anything important anyway. Whenever I have a minute or two I do use Twitter but I only follow friends who tweet infrequent but interesting things or people who consistently tweet interesting stuff like @jonmyers who has a knack for posting links to great articles. I also subscribe to the StartupDigest Reading List which sends out an email with some great articles every week and I’m a sucker for reading the answers to questions people ask on Quora which I also receive in my inbox every week.

8） Final question. Tell us your dream!

I love creating things. As an entrepreneur you’re always thinking about new ideas and about how you can change the world. Unfortunately once you start a business it’s a lot of work and dedication to make it successful so you don’t have time to tinker and experiment with all those ideas floating in your head. Time becomes a huge limiting factor. One day I would love to be able to, maybe through my own business or by mentoring others, play with tens of ideas at a time instead of just one or two.

Starting a business is a big challenge, and doing that abroad is an even bigger challenge. Yet once you make it,
you can move the business to even another country, if/when you see an opportunity and better life and market opportunities will have no boundary for you.
That is what Eric is showing us. It is quite impressive.